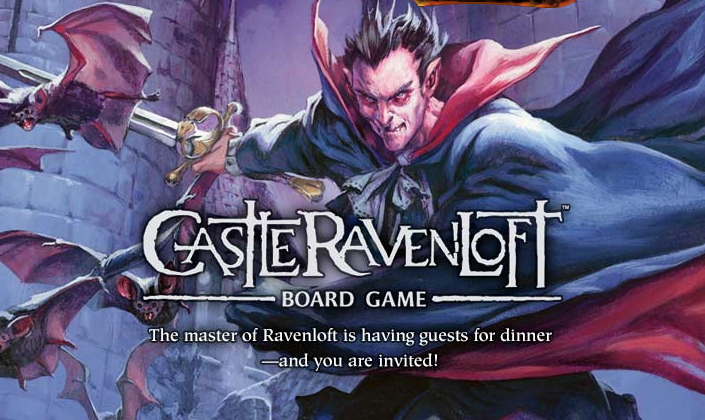 Ever wanted to play D&D but didn’t have a DM, characters or know the rule set by heart? Castle Ravenloft, a board game that is very loosely based on the D&D 4e rule set, is here to the rescue.

Each player takes turns exploring a randomly generated dungeon, running into encounters, fighting monsters, gathering loot and eventually completing an adventure, all while rolling a d20! Each adventure runs about 2-3 hours and supports up to 5 players.

This is a great game to kill a few hours and a few monsters with friends. I’m not a huge fan of competitive games which makes Castle Ravenloft a refreshing change of pace. Each player works together to complete each adventure. The dungeon is generated by flipping over random tiles (large puzzle-like pieces). Which is filled with random monsters, also controlled be each player. Two concepts that I find make the game interesting and engaging.

After playing this game a handful of times with various friends I felt that the character’s abilities don’t encourage strategy. There aren’t any true “Controllers” that help shape the battle. Instead most players simply hack and slash. Leveling up is a bit limited. Rolling a natural 20 and spending some experience enables you to flip your character card over. Your stats increase by one and you gain an additional ability. After that you do not level up any further. The adventures and the game mechanics make Castle Ravenloft feel more like a dungeon crawler, unlike board games such as the Rise of the Runelords. Where the variety of player actions makes it feel like a Pathfinder campaign. I also found the game to have very few rewards. When exploring the dungeon you are guaranteed to run into a monster, in addition to the possibility of an encounter or other event. Not only is the repetition boring it also makes the players regret exploring.

“Castle Ravenloft is a refreshing change of pace”

Castle Ravenloft is a solid cooperative board game. It is very easy to setup and easy to play. It is not difficult to lose track of time as you explore the dungeon. However, don’t expect the depth of a true roleplaying experience.