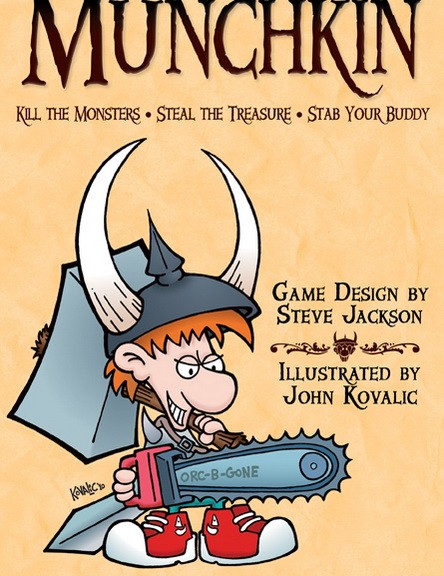 Munchkin, as the cover art says- Kill the Monsters, Steal the Treasure and Stab Your Buddy. An easy to pickup and play, competitive card game. The instructions do look a little intimidating but after a few rounds, gameplay is smooth and fun.

I found the artwork and silly writing to be the most enjoyable aspect of Munchkin. I would look forward to kicking down the next door simply to see what zany card I would get. 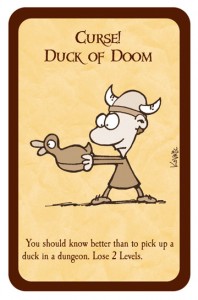 Working with your friends to defeat monsters and then later stabbing them in the back provides for some intense and funny moments in Munchkin. Tip: careful when a “friend” offers to help defeat a monster without sharing the treasure. Remember there’s no such thing as free lunch. Like any good role playing game, Munchkin is filled with good loot. Outfitting and showing off your character is all part of the fun! Just remember that loot uses slots and typically you can carry only one big item- I’m pretty sure you don’t have three hands, so no you cannot carry a shield and bow. 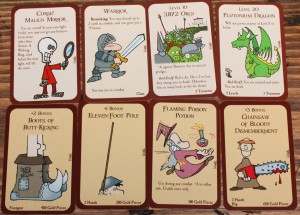 Munchkin doesn’t give you much to gripe about. Just make sure you read rules correctly and don’t draw from the treasure desk when looting the room.

When you’ve played Munchkin enough to know each card by heart its time to pickup an expansion or special edition deck. The adventure continues with over 25 decks to choice from. 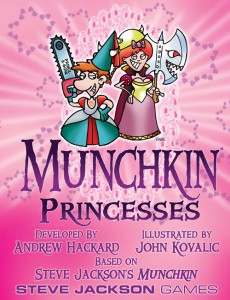 Munchkin is a light hearted competitive game that has you working together to later foil your allies. Defeat monsters, collect some loot, argue over the rules and drink some beer- D&D but in a card form!