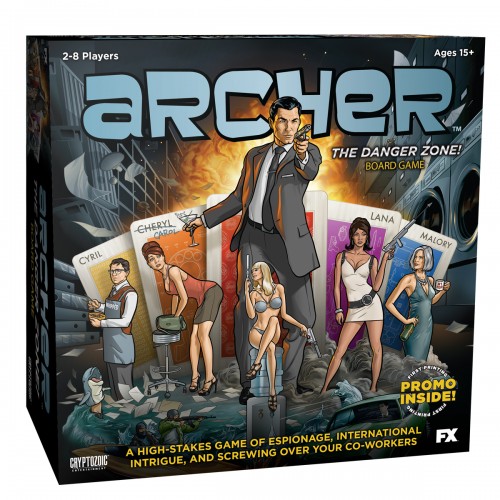 The goal of the game is to be the first person to gain 20 upper hand. Everyone starts at 5 and, yes, you can go backwards. In fact most of the game strategy is about taking the people in the lead down a peg or two.  Each player gets a character from the show (there are 8) and a deck of chards to go with that character.

The game is broken into two phases. The first, the movement phase, has players putting their tokens in various locations of the ISIS headquarters. If you are the first character at a location you get a benefit (go first next time, go first in the mission phase, gain a free upper hand, etc.). Each location has different bonuses, and each round your strategy will change. If you are not the first person at a location, you don’t get a benefit, but you do get to roll 1 dice for each character there before you. On a roll of 5 or 6, you pull a card from your character deck. These cards allow you to insult the people in the room (taking away their upper hand) or advance yourself on the upper hand track.

In the mission phase, you pull cards from the mission deck and try to complete them. There are 4 types of cards – guns, sex, booze, smarts. Each card has a number you must roll to succeed and an amount of upper hand you gain for success. There are always fewer cards than players, so it’s a good idea to be the mission leader or very close to them.  Each player has the 4 stats on their player card but they are each good at different things. For example, Archer rolls 3 dice on booze challenges, 2 dice on guns and sex, and only 1 dice for smarts. If he ends up with a smarts mission as the only one he can try, chances are he will fail. The good news is, as a player, you still roll even if you can’t succeed. On a 5 or 6 you pull from your player deck which can still help you, or, more likely, hurt the other players.

Fans of the show will enjoy the clever one liners on the character cards. The game is also really well balanced with no one character or strategy able to lead to certain victory. We spent a good amount of time all bunched up in the same part of the upper hand track.

A lot of the fun of the game was playing with people that watched the show. Many of the jokes aren’t as funny if you don’t have a passing understanding of the show.

We played with the max number of players (8) and found we ran out of mission cards. This can be solved by taking a pic of the missions you have won with your phone camera and reshuffling. On a second play through, we found it isn’t a good bar game. Too many pieces and all the conditional dependencies make it hard for a large group in a loud setting to follow.

Any game that makes you hate your friends is a good game, right? Also, we had a great time coming up with names for the missions based on the cards drawn. A mission with 3 booze and 2 sex we named whiskey dicksey.