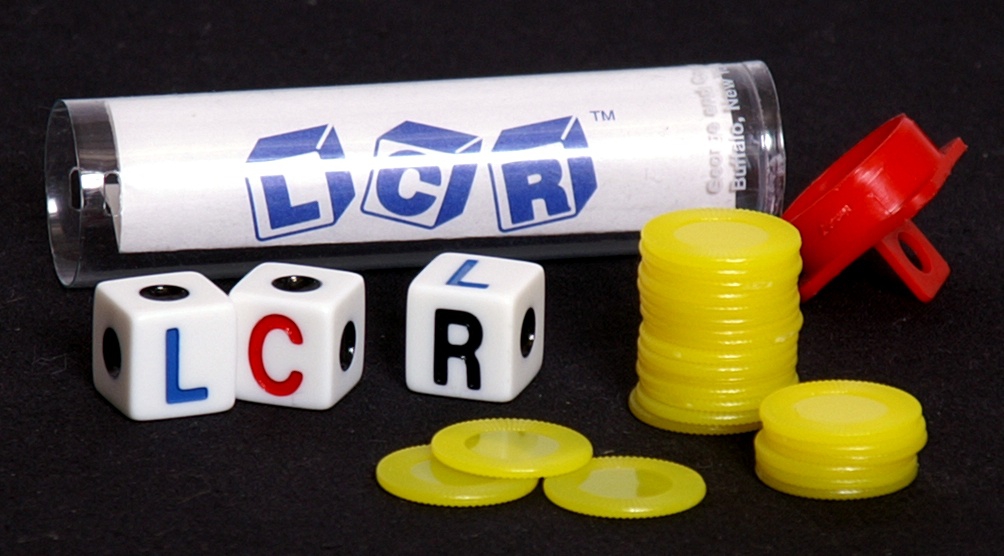 LCR, or Left Center Right is a dice game of chance made up of 3 or more players. As a player you don’t make any decisions and the outcome of the game relies solely on how the dice is rolled.

In the variation I played we used dollars instead of chips, but the idea is the same with the exception that the winner is rewarded with a mega bank roll. I like the simplistic nature of this game. It is very easy and anyone can learn it and play it.

The basic gameplay is setup with a group of players at a table. Each player starts out with 3 $1 bills or 3 chips. A player roles the dice and based on the role will have to give up each of their currency to the left, center, or right positions based on the dice role. The game is played until only 1 person remains with at least 1 piece of currency. The winner will get everything in the center pot. A large benefit to the game is even if you are out of currency and don’t get to role the dice anymore you are still not out of the game. Your luck can change at any moment when another player has to pass you their currency.

If you play the game with real money you may end up loosing some real cash, but I played 3 rounds with about 20 people and it only costed me $9.

If you don’t want to run out and purchase the special game dice here is how you can play with some regular dice you may already own. Rolling a 1, 2, or 3 means you keep the corresponding bill. A 4 and you pass that bill to the person before you, 5 it goes into the pot, and 6 to the next person.

The game plays much better with a large group of people, and remember your not out of the game until the last dollar is being held. Be sure not to walk away from the the table until then.