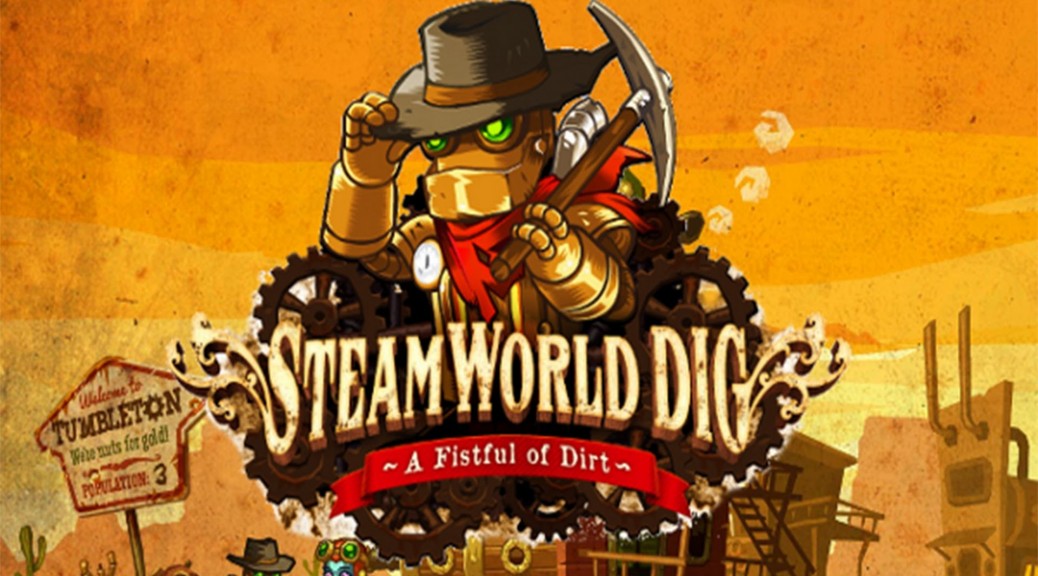 Weather you like mining, robots or steampunk this 2D Platformer provides a mix of metroidvania and Dig Dug.  (http://steamworldgames.com/dig/).

You start the game as Rusty the Robot, a simple automaton who has inherited his uncle’s mine in the dilapidated town of Topside. Your first task is to find your uncle and literally take up his pickaxe to revive the town and find the riches hidden below.

Topside acts as your base of operations allowing you to trade in your precious minerals for gold, which can then be exchanged for upgrades allowing you to mine more minerals, dig faster, dig longer, or do more damage to the plethora of enemies lurking in the depths.

While the mechanic of digging can seem repetitive at times, there are many upgrades that can only be found by digging deeper. Rusty’s uncle was a bit of a tinkerer and left behind many upgrade stations that grant Rusty new steam powered abilities such as a boost jump to reach previously inaccessible areas, or a rocket punch that can destroy multiple sections of dirt or hit enemies from a safe distance. The more useful upgrades require steam to function adding an additional resource bar for water which must be collected from underground pools adding an additional level of resource management difficulty.

The more loot you collect and trade in the bigger Topside grows as new vendors move in to cash in on the gold rush you are single highhandedly providing. These vendors bring higher tier upgrades and anecdotal  stories about your uncle and the town.

Hidden throughout the game are caves which hold extra valuable loot but require you to solve puzzles in order to reach your prize. this helps break up some of the monotony by challenging you to dig the correct path to riches.

Repetition, repetition, repetition. Most of the game is spent simply digging downward. The iOS game “I Dig It” which is basically the same concept had this issue as no matter how deep you got the mechanics basically stayed the same. SteamWorld Dig works through this issue by smattering enemies and traps throughout the depths forcing the player to be creative with how the tunnels are dug.  The primary complaint i have with this game is that the starting resources are too small, i found myself having to constantly return to the surface in order to replenish my light source so i could see where i was digging, and in order to return to the surface you have to clumsily wall jump back to the top of the level or at least mid way to a teleporter that takes you to the surface. Half of the game is spent backtracking just so you can see what you are doing. I wish they had used the depth mechanic from “I Dig It” where you had to purchase Hull upgrades in order to survive the molten heat and crushing pressure of the deep.

Each new ability is unique enough to keep you digging to see what else ol’ Rusty can do, which keeps me coming back to this game. The game is also beautifully illustrated in a gritty cartoon style that makes it easy on the eyes.

SteamWorld Dig is a family friendly platformer that is easy to pick up and hard to put down. If you need a break from Assasinations and the Call of Duty, I highly recommend giving it a try. SteamWorld Dig is currently included in Sony’s Playstation Plus promotion for PS4 and is also available on PSVita, Nintendo 3DS, Nintendo WiiU and PC/Mac.